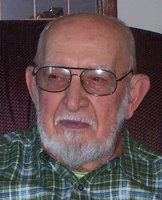 JAMES P. “JIM” LANTZ James P. “Jim” Lantz, 91, Auxvasse, MO passed away Saturday, May 1, 2021 at Fulton Nursing and Rehab in Fulton, MO. He was born August 20, 1929 in Abilene, KS the son of the late Ira V. and Florence Mae (Hostetler) Lantz. He grew up on a farm north of Abilene and graduated from Abilene High School. In January, 1951 Jim joined the United States Navy and served until 1954. As a Second-class Petty Officer, he spent two and a half years aboard ship USS Kaskas A027. During his service, Jim was awarded the following medals: National Defense Service, Korean Service, Sea Time MOPACT of 1952, Presidential Unit Citation, United Nations Service and Good Conduct medal. Jim then attended college for two years at Oklahoma A&M and received an Associates Degree in Construction Engineering. After which he worked for Phillips Petroleum Co. doing surveying and pipeline construction from New Mexico to Oklahoma. On September 7, 1957 he was united in marriage to Wilma Hutchinson, of Milan, IL. They lived in Lindsey, OK and Crestwood, MO before moving to Auxvasse, MO in July of 1960. He will be sadly missed and lovingly remembered by one daughter Julie Hanson and her husband Bill of Auxvasse, MO; one granddaughter Jennifer Hickman and Skyler Sullivan; two great granddaughters Kaylee Sullivan and Adalynn Sullivan; one great grandson Thai “Preston” Sullivan; three brothers Ivan Lantz and his wife Merle, Roy Lantz and his wife Jody and Harvey Lantz; one sister Dorothy Tharpe; many nieces and nephews; and many dear friends and neighbors; In addition to his parents and wife Wilma of 52 years, an older brother Kenneth Lantz preceded him in death. Jim worked in construction building and co-owning the Blue Star Motel. After selling the motel, he bought and operated the Auxvasse Hardware Store for 13 years. After he sold the store, Jim went to work for the U.S. Post Office as a rural mail carrier for 20 years, retiring December 31, 1989. Besides being a lifetime farmer, he was a life long member of the Fulton VFW Post 2657 and an active member of the Auxvasse City Presbyterian Church. Jim enjoyed hunting, fishing, woodworking and travelling. Funeral services will be 11:00 am on Wednesday, May 5, 2021 at the Auxvasse City Presbyterian Church in Auxvasse, MO. Visitation will be from 10:00 am until service time on Wednesday, May 5, 2021 at the Auxvasse City Presbyterian Church in Auxvasse, MO. Memorial contributions may be made to the Auxvasse City Presbyterian Church or to the Fulton VFW Post 2657, c/o Oliver Funeral Home, P.O. Box 125, Centralia, MO 65240. Condolences may also be made to the family at www.oliverfuneralhome.net To those attending the visitation or funeral service, we ask that you maintain social distancing. Be aware that capacity and seating may be limited and that people are welcome to and encouraged to wear face masks to protect themselves and others. We will follow all guidelines set forth by Callaway County.