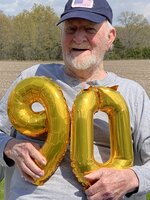 WILLARD DIXON ANDREWS, SR. Willard Dixon Andrews, Sr., 90, of Centralia, MO passed away Tuesday, January 25, 2022, at Noble Health Audrain Community Hospital in Mexico, MO. He was surrounded with love by his family as he peacefully passed. Willard, or Ward as he was also known, was born in Albany, NY on April 23, 1931. He was the son of Clifford Thornton Andrews and Agnes Estella Kelso. Ward was one of ten children, three of whom died in childhood/infancy. Ward showed early interests in creative pursuits in art and acting during his school years and after he graduated from high school, he followed his big brother’s lead and joined the Navy. He was sent to Kodiak, Alaska where he was stationed as an airman on the navy base and while there he worked at the gedunk and was on the Armed Forces Radio Service (AFRS) as well as acting in a entertainment/ comedy act at a club. Ward met and fell in love with Katherine Augusta Berry (Katie) whose family was also staying in Kodiak (her father worked at the navy base) and they were married in 1952. During the few years they lived in Kodiak they had two children, Willard Andrews Jr. and Katherine Andrews. Ward left the Navy to go to College and moved his family to Tucson, Arizona where he attended the University of Arizona and earned his Fine Arts Degree. While at the University, Ward was active in various plays and theater. In 1960 they had their third child, Margrett Andrews and after graduating Ward got his first job as a newsman at KOLD TV. After a couple of years Ward then moved the family to Oklahoma City where he took a news anchor job at KWTV and their youngest child was born, Kenneth Andrews. Kansas was the next move with news anchor jobs at KTVH and then WDAF. Ward’s final career move was to go south to Texas where he first worked at KENS in San Antonio and then to Ft. Worth where Ward had his longest and most successful news anchor position at WBAP/KXAS. Ward retired in 1983 and moved with his wife Katie to her family farm in Centralia, MO. During his retirement Ward created unique ceramic figurines and paintings and he and Katie were members of the Artist Guild. They would sell their art at craft events all around Missouri. Ward enjoyed all sorts of dancing and was a great dancer. He often danced at the Anchor Fest and at the Audrain Hospital Valentines dances as well as part of a square-dancing group. Ward enjoyed crosswords and puzzles and had many interests. During the summer, when the grandchildren would visit, he loved playing “Farkle” with them and it became a family tradition along with playing Croquet. Nothing kept him from playing a fun and competitive game of Farkle. Ward went back to work for awhile working as an editor at The Mexico Ledger. He also had jobs at Brookstone and Walmart. Ward was a very social person and enjoyed the places where he worked and the people he met. He had a wonderful sense of humor and was blessed with some very close longtime friends. Ward was preceded in death by his parents, seven siblings, his youngest son Kenneth Andrews and his only grandson Matthew Gipson. He is survived by his wife of 69 years Katie; his oldest son, Willard Andrews Jr. and his wife Julie and their daughters Moira and Isla; his oldest daughter Katherine (Matthew’s mother); his youngest daughter Margrett; and the wife of his youngest son (Kenneth) Melinda and their daughters Amellia and Eris; Ward’s brother Richie Andrews and his wife Janet; and brother Harley Andrews; as well as various nieces, nephews and cousins. Ward will be missed by his family, friends and fans. A celebration of his life will be held this summer by the family on their farm. Memorial contributions may be made to the City of Centralia Avenue of Flags, c/o Oliver Funeral Home, P.O. Box 125, Centralia, MO 65240. Condolences may also be made to the family at www.oliverfuneralhome.net